I for one, ride a motorcycle to get away from it all. That’s the whole idea, isn’t it? Get on our motorcycle and ride, forgetting the emails, phone calls and whatever else is making all that noise in our ears and distracting us from our sanity. Too much really is too much. I can remember a time when I left my phone at home and lived to connect another day – that’s because the phone was mounted to the wall in the kitchen. If we missed a phone call they would call back – if it was really that important. Today we walk from room to room carrying our mobile device with us, (you know, just in case) when we used to stand or sit next to the phone in the kitchen while we talked to our neighbor. Most of our messages came in the mail box with a stamp on it, not instantly of course, but in 3-5 days. Now, in a world of instant communication, if our little black ball and chain we carry around with us isn’t vibrating or beeping every minute on the minute we immediately think no one cares anymore.

We have become so used to immediate information and constant connection, that we’ve forgotten about anticipation. As quick as instant stimulation comes along, we move on to the next without absorbing what just happened, almost to the point of losing it’s shock value. Good news or bad, as soon as we digest it, it’s gone and it’s on to the next tasty morsel of information. Whatever happened to waiting on a letter from a dear friend, or your next issue of Motorcyclist Magazine to come in the mail? Shouldn’t it be here already? Where is it? Don’t they care anymore? Of course they do. That’s called anticipation. I can’t remember the last time I had a phantom vibration from my mailbox out by the street.

Riding motorcycles gives us an opportunity to escape this high-tech jungle if only for a little while. I’ve seen it too many times though, as a rider pulls up to park his or her bike, the same routine will follow; pull up and stop, drop the kick stand, shut off the motor, pull the helmet off and then check their phone for any missed calls, texts or updated statuses. Really? I’m guilty and so are you. In my early years of motorcycling, we just left the house and if the phone rang off the wall we wouldn’t know it. There was actually a time when I didn’t have an answering machine! If the phone rings in the kitchen and nobody’s home, how would you know? You didn’t! Did time slow down and the world stop spinning because of it? Here is a simple test: How far will you ride back to your house if you forget your mobile device? 5 miles? 10 miles? The answer here is you won’t have to double back because not many would forget it in the first place. It’s that important to us and if by chance, and I mean a slight chance, you forget it you will ride 5 miles back home to retrieve in the kitchen where you left it. Hold on here, isn’t that where the phone was mounted to the wall when I was a kid?

I’m not beyond technology. I find the convenience of a mobile phone a great tool to have for any motorcyclist, and it gives a great sense of security while I’m out riding – but I also realize when I’m riding it can become a distraction from the whole reason I’m out here anyway. On my last trip to Sturgis, my phone went dead on day three and I was okay with that. Sure, I charged it up when I got the chance, but it didn’t seem that important by then. In fact, it was kind of nice not having to worry about missing anything of importance. Who am I kidding – I couldn’t take any pictures, send any humorous text messages or find out when everyone was meeting at the Knuckle Saloon. Time had slowed to a crawl and the world as I knew it was standing still, but I made it.

Given the world we live in now, it’s important to go with the flow, and it’s all about the balance of getting lost – but not too lost – on our motorcycles. 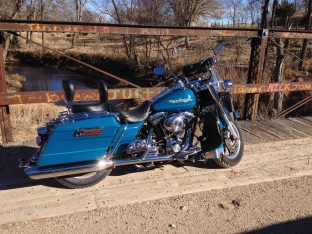