It happened a couple of times every year. The family vacation to Colorado or Nebraska was a good trip and it was always nice to get out of the small town and hit the road. Me being the youngest of three kids, my place was sitting between my brother Danny and sister Jan in the back seat. I don’t need to say anything else to all of you “youngest”, but it was the least comfortable place to be because there was no window and nothing to lean against that didn’t punch you. At times, before I started growing like a weed, I would actually lay on the rear deck in the back window. I can hear it now, “How could they allow their child to be in a car unrestrained and in harm’s way”? It was the late 60’s and early 70’s so what do you expect! Most people didn’t think about that and admit it, you’ve been there.

As my sister grew up and left the house there became more room in the back seat which was good because I was growing as well. Then it became my turn to sit by the window. We didn’t have cell phones, i-pads or dvd players. The only thing we had was an 8-track player in the car with Gordon Lightfoots’ Greatest Hits playing, and our imaginations. So for many hours driving across Kansas, Nebraska and Colorado I used my imagination to keep me occupied. Mostly pretending I was on Roger DeCoster’s motocross bike just inside the fence line along the highway. Jumping the fences as they came up was easy as someone had conveniently placed a mound of dirt there for me to get over it. If the path got to be impossible I would move to the ditch and continue. After all it was MY imagination! Speed wasn’t important, I could keep up with the car no matter what. I was that good.

When my brother finally moved out I had the back seat to myself. It’s funny how lonely it can be even when you didn’t like the cramped conditions to begin with. So as the road trip began, it was my mother and father, me and Gordon Lightfoot. The Fury III was a large car and the vinyl seats were comfortable. For those of you that don’t know, vinyl is a material that was designed to adhere skin to car seats. Lucky for me I was a self conscious preteen at the time and always wore jeans.

I found that my imagination has remained with me. I still look at the terrain along the road and the tree lined roads with fences. The ups and downs and the deepness of the ditch. I don’t imagine myself riding along the car as every great motocrosser has to retire sometime, but I have to admit that I have watched my shadow rolling along beside me when riding my motorcycle. Wow, I look good! And you would think I would know every word to every song Gordon Lightfoot sang. And maybe I do. Some things you just can’t forget.

2 thoughts on “The View from the Road” 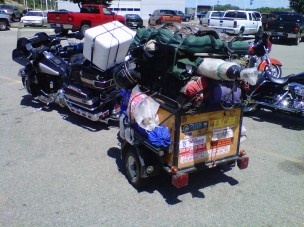 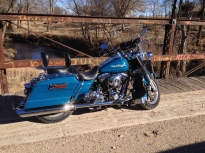