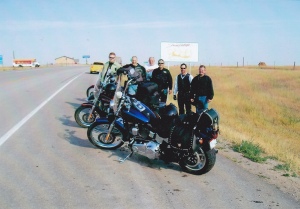 So I’ve been thinking about the road less traveled. We motorcyclists seem to search out this road to find the peace and serenity of a curvy or tree-lined way of getting there. Usually it’s a short two-lane between cities or major highways, but beautiful none the less. But how far is the road less traveled? How far is “off the beaten path”?

A road trip to Sturgis in 2007 found me and six of my friends on one of these roads. It was a Sunday and it didn’t take us long to find out that in some remote places of this country there is a world of folks that take Sunday off! Mostly gas station attendants and repair shops. As we rode into the Northwest of Nebraska we soon found out that the more you need gas, the harder it is to find. A great idea of a modern version of the old gas station,open 24 hours, to include beef jerky, hotdogs on heated rollers and pay at the pump gas, more commonly known as a convenience store, had yet to make it to this corner of Nebraska.

As we pulled into a farmer’s co-op this Sunday afternoon with a closed sign in the window and no pay at the pump, it was decided that a restroom was also a pretty important part of the modern conveniences we have come to expect. Well what do seven guys do when nature calls? We answer  the phone! Standing next to a bulk fuel truck and our backs to the highway, we found the one person that does work on a Sunday. He wears a badge and drives a pretty fast car. He pulls in and asked what we were doing in a very nice but firm manner. We explained the situation and expecting the worse, he was quick to get on the one piece of modern technology that did make this far off the beaten path, his cell phone! He called the one guy that could come and open the co-op for us to get gas.

Relieved, in more ways than one, we stayed for a little while and spent some money on Snickers bars and Mountain Dew. The appreciation on our faces was obvious and the officer stayed and hung out as well. It is truly amazing at the helpfulness of those in the small towns. I know as I’m from one myself. But to go out of your way and help is a two way street. Pass it on or pay it forward. Take the road less traveled and relax. Meet the local people face to face, or wave at the young boys on their bicycles as you ride through town. It’s a pretty universal language.

As I said, coming from a small town myself I know how these communities struggle. Next time you stop for gas, buy that candy bar or hotdog on a heated roller and show your support. You never know, that same place may not be open next time you pass through without your support. 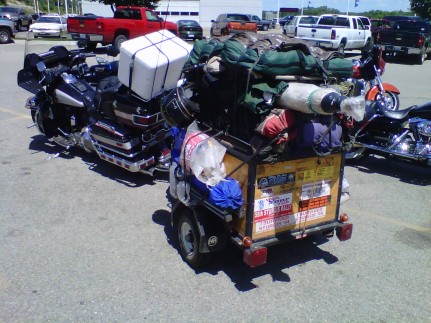